No, this is not one of the quizzes that have been around for at least the last decade... but which we still somehow take because we're bored or curiosity gets the better of us... (I hope you aren't one of these) or because you take that nonsense seriously.

Mostly, this comes from my own recent ponderings.

Back in the previous era of blogging, I would post different quotes, movie lines and bumper stickers at the bottom of entries. When I had the energy, I'd go out of my way to find things relating to the topic of the writing... By just as often, I'd stick with one thing that fit where I was in my journey. Those quotes, for the most part, have been lost to the ether.

Helen Keller has been a role model of mine since about age 7. Her words are a part of me to this day. I can't pass a quote of hers without comment of my own. She's almost a part of my own identity.

In my teens, I learned about Mother Teresa. I'd heard of her before then, growing up in the Catholic Church, but it was in my teens that I realized so much of what she said spoke directly to my deepest, hidden, vulnerable places. They still do.

This past week saw the passing of Maya Angelou, a tremendously talented, passionate woman and survivor of sexual abuse. I've read her work and admired her from a sort of casual distance over the years... But it wasn't until her passing and the resulting memorial pages everywhere that I realized some of the words I've held at my back these last 15 years or so originated with her. 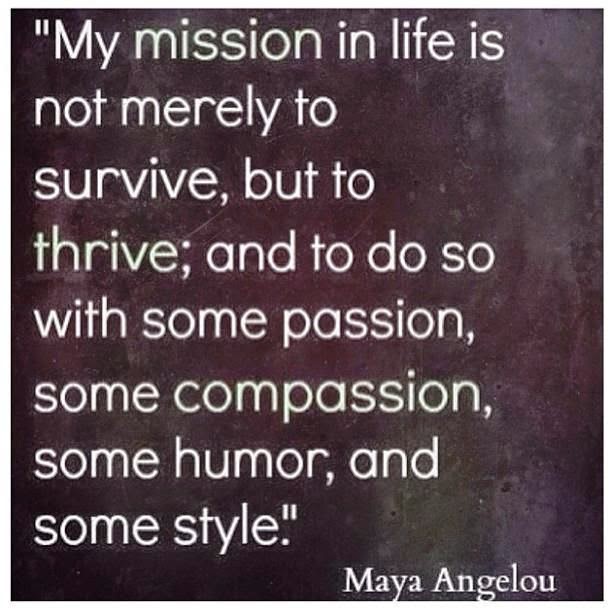 The above words were a driving force in my recovery. Realizing life was about more than surviving was a powerful revelation.

A variation of these words are part of the many lessons I've tried to impart as a parent... And grandparent.

They're everywhere. Quotes from famous people, passages of scripture, jokes and still, those bumper stickers, posted in fancy fonts on pretty backgrounds on social media everywhere. There are even e-card sites turning tweets into memes using retro pictures... Just without credit to their original authors. (Pet peeve)

For most american high school and college seniors, pages of yearbooks are dedicated to highlighting individual student mottos... I didn't attend a regular highschool. If I did, I'm sure I'd have wanted "Sometimes you just have to say what the fuck" (Risky Business)... Knowing that would never be accepted, I'd have ended up going with a line from Heathers or the ironic advice of a middle school English teacher who once rolled her eyes and told me to "try not to confirm too much".

The words of others, good or bad, can have a tremendous effect on how we live our day to day lives. Too often, those words are negative. Harsh statements spoken long ago which we unconsciously parrot back to ourselves on a daily basis.

Long before entering treatment for DID, I began fighting those old messages with passages of scripture which directly contradicted each individual message. I memorized so much, I reached a point where I could quickly call to mind an argument from the bible to whatever words were swirling in my head at any given moment.

In addition to that arsenal are others... Some, quotes from historical figures and contemporary artists, others from people I know and love.

We used to have a quote of Charlie's done in calligraphy and framed. At some point, the glass in the frame was broken and later, one of the grands colored over it in blue ballpoint pen... But the words are etched in my soul both as a mission and a reminder of why Charlie remains one of my true heroes.

"Each day, we must strive to touch the lives of those around us and, in those moments, enrich the world in which we live."

Yup, he's mine. Be jealous.

More recently, Krys shared with me something Dora told her: "Mommy don't be sad that I grow up. One day Caz and me will be mommies and daddies and you will be too proud to be sad anymore.”

What a poignant and insightful encouragement, because they do grow and it's such a bittersweet joy. These words have already etched their place in my memory.

An oft quoted toddler phrase in this house is something Elena said nearly a year ago when her little kid sixth sense picked up on my stress: " Cawm down. Take a deep breff. It be okay.”

Not a week goes by without Charlie or me saying that to someone we love. It's both a humorous statement and encouragement all in one. Plus, we're just dorky enough to enjoy repeating toddler lisp.

However original we may be, most everyone has at least one phrase they can identify as a personal credo. A guide on the map of our lives...

I've long sought just the right original design for a tattoo to be a testament to The Crew. For a long time, the stages of a Monarch Butterfly's transformation from egg to flying work of art was the imagery I hoped to capture... But in the end, it was a Latin phrase with roots in Corinthians that won out. It's short, simple, something life has taught me is true, and, perhaps most importantly, something I can do myself. Money for a professional tattoo isn't even on my list of priorities in life right now.

Love conquers all... Pretty much covers it all for the legacy of The Crew.

And really, when it comes down to it... The Crew and words of Maya Angelou have been at the heart of the ponderings behind this post.

While browsing Facebook memorials to the legendary writer, I came across these words: 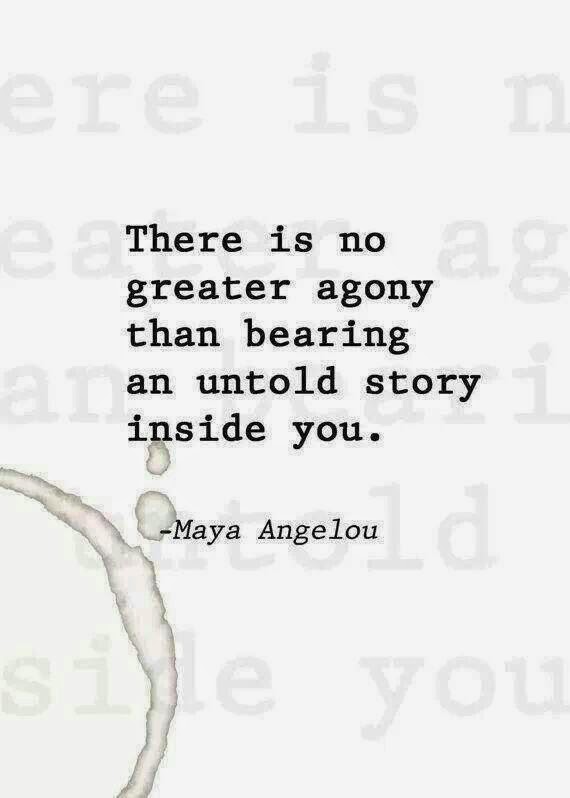 To say I burst into tears is a bit of an understatement. It was more the breaking through of grief and regret for speaking up through writing all those years only to allow myself to be silenced before the story had been told. Sadness for all the years in between blogs. Fear that it's a story without a neatly wrapped up ending that no one really wants to hear. Finally understanding the gnawing ache that exists when I'm not telling the story through art, music or written word... And the humbling realization that if I'm doing it for recognition, traditional publication, money, ego or any reason beyond needing to do it for my own peace and wholeness, then my priorities are seriously whack.

Like my own story, still coming in fits and starts in the other blog, this post doesn't have a tidy ending... I know what I need to do but haven't quite sorted how to consistently fit it into this chaotic life...

So, let's have a discussion instead of a tidy one line closing.

What's your motto and why?

― Guilliame Apollinaire
Posted by Marisa at 1:46 AM