Ever have periods of time when it seems you're living entirely at the mercy of Murphy's Laws? If it can go wrong, it does. If it can break, it does... and if it can wreak havoc upon your life, it most certainly will.

That sums up most of the last month or so around here. It may sound a little defeatist but... meh... that's kind of the ruling emotion at the moment.

I have a special gift for using thoughts like that as a tool for self-flagellation... "Silly woman, letting emotions get to you! Punishment.. That's what you need." Bah.

One of the issues to rear its ugly head these last few months is, what seems to be, an all out war on my body and mind by PMDD.


Without getting into massive amounts of TMI, PMDD is to PMS what a shark is to a tuna. Not only is everything bigger and nastier, it simply lasts longer... and it really packs one hell of a bite.

I've read about menopause, the perimenopause years and what to expect... But no one mentions that PMS or PMDD symptoms can grow drastically worse in the years leading to true menopause.

In my case, this is pretty unfortunate news. My history of suicidal behavior and self injury during that particular time of month is well documented. It's what led to a diagnosis of premenstrual dysphoric disorder in '03 or so.

When the symptoms of perimenopause became consistent about 3 years ago, I dealt with it as humorously as possible. It's a normal part of life. May as well accept it and look for every possible opportunity to lighten things up.


The last 3 months have brought with them a 3-4 day period each month where I'm stuck in my room or otherwise isolated and crying while trying to decide if I should have myself committed or research self-hysterectomy. Yeah, that bad. 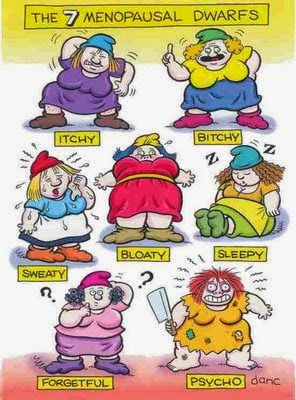 Now take PMDD, a crazy making issue all its own, and add the physical changes that occur before menopause and suddenly my sanity is delicately balanced on something so sensitive a breath could tip things.

No, wrong analogy... It's like I've stepped on a Bouncing Betty and if I don't stand perfectly still until it's disarmed, I'll be scattered 200 feet in every direction along with any loved one unlucky enough to be close by when it goes. 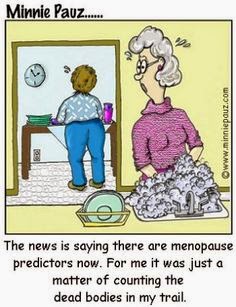 On the upside, 3 months of watching and paying attention to my body more than writing or the distractions of the Internet has given me some vital information. I can now predict which days are the worst, which days to prepare for or plan to fight migraines and which days to ensure I can focus on self-care so as to minimize the control this currently has on my physical and emotional health.

Interestingly enough... the rash which sent me to the ER in the wee hours 4 weeks ago started again last night. Instead of waiting for it to spread everywhere, I attacked with mass quantities of antihistamines as soon as I recognized the signs and managed to wake up mostly hive free today.

I haven't checked the dates but either my body is overreacting to allergens at a specific time each cycle or I'm more prone to expose myself to possible allergens... I tend to think it is likely the former rather than the latter but will have to add that to the list of things to watch out for. 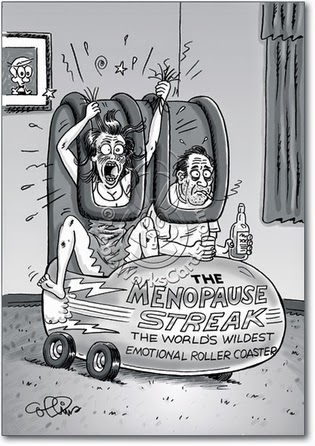 The net is filled with cute to biting satire about menopause... whether in cartoon, meme or essay form... it always seems to be about Menopause... well here's a reality check: MENOPAUSE ISN'T THE NIGHTMARE! It's the preceding years that kill you... or make you wish they would. Menopause means the hormonal roller coaster from hell is over. You are finally at a stage of life when you're free of the second (and worse) puberty you weren't properly warned about and can get back to living a life not controlled by a monthly cycle.

Every story I've ever heard about "The Change" refers to menopause and not PERImenopause... which is when the actual changes and occasional breaks with sanity occur.

I know I'm not alone... there is myriad evidence others have it as bad or worse than I do right now... a friend mentioned it was during this particular period of life when her mom pulled a knife on her. It's both scary and reassuring to know feeling dangerous is not an abnormal part of the package.

I'm currenly back on the upswing and hoping to make good use of the time, both around the property and the writing.

Yesterday, the kids and I cleared out the largest of the sheds making room for a car, present storage and a full quarter of the space for whatever creative or messy project I might want to do in shade and shelter.

The shed is a huge deal, if for no other reason than having an area where I could spin around with my eyes closed and not slam into something. Clutter and crowding have worn on my patience for months and it's nice to see a little more headway being made.

Usually, I'll get an area cleared only to have it fill up again before another area can be addressed. A frustrating cycle that leads to nightmares of being featured on a Hoarding intervention program.

In addition to the shed, we've made headway on the yard and garden. I'm working on custom orders before adding more items to the Etsy shop.

As much as I cried and beat myself up last week for only growing further behind in life, the evidence doesn't bear that out. We are taking care of things. It is getting better here on the land. The collective and individual dreams of our family are not out of reach and, you know... all that "I'm okay, you're okay" bullshit.

Also, bought a domain name. That Maya Angelou quote about bearing an untold story... it's here in me and in pieces and parts online and off... but it will be told.

But first, a little more decluttering of life... I don't want to have to run hide in a shed for room to breathe.