There's been more than enough writing about people who can mar life's journey. It's time to share about the people who make it better.

The kind of people who, whether for a moment or for a significant measure of time, just brighten things. Sometimes they are familiar faces we are always happy to see, other times they become a part of our family's story forever.

Brent, AKA The Peanut Man is one such person. 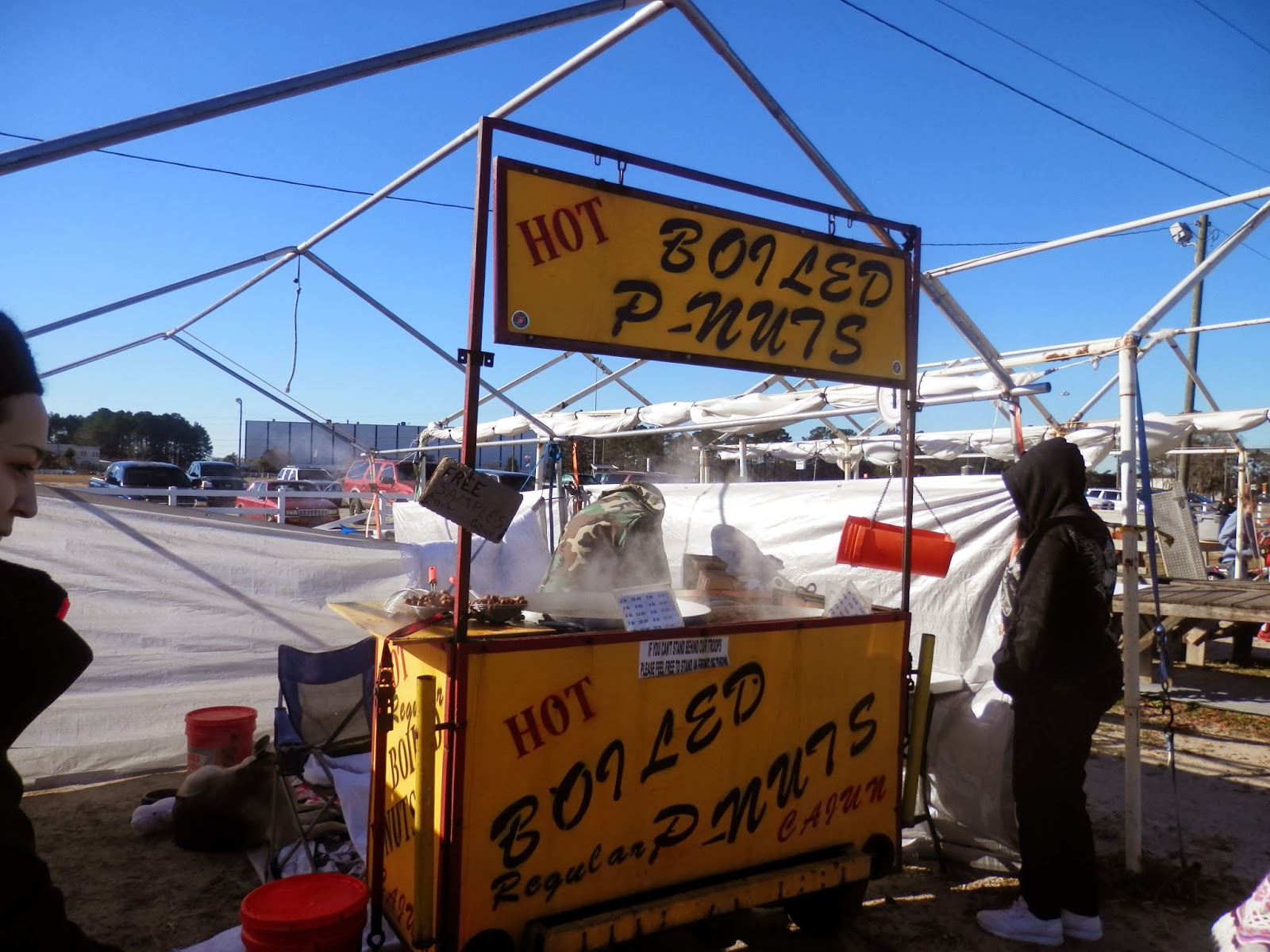 Until this past summer, the flea market was an occasional weekend thing. We usually only ventured out if we were looking for something specific... second hand tools, refurbished appliances, cheap imported trinkets, the like. In the mid-90's, I'm sad to admit, I was very much a part of the flea market's hotbed of Beanie Baby trading but we're not going there.

Usually though, what brought us to the flea market was a craving for Boiled Peanuts.

Boiled peanuts. As southern as sweet tea (which is rumored to have its origins in our own hometown) and just as easy to find... if you aren't picky. Roadside stands are as common in the south as farm fresh produce stands in the summer or Sweetgrass Basket weavers along US Hwy 17. But the true peanut connoisseur knows who uses fresh green peanuts, who uses the less tender mature ones and who just reheats gallon cans from the Piggly Wiggly. Charlie's Daddy was a Peanut Man back when Charlie was not much more than a green peanut himself. He grew up learning the ways of the "true" boiled peanut (much like the family's secret moonshine recipe) and can be a tad picky.

Until a little over a year ago, we sought out "Mama" whose trailer shack was a regular sight at the flea market. When Mama retired, we had to start shopping around.

It was over the summer that Elena began to have a regular Friday sleepover at Pawpaw and Damma's house. Then, as Charlie recovered from his illness, hospitalizations and ICD surgery... he was ready to get the heck out of the house for more than doctor visits and errands.

He wasn't ready for a lot of walking but the flea market is set up so you can almost as easily cruise the outside areas in a car as you can walk. It was ideal for all of us as he didn't have to walk more than he could handle and Elena and I could wander until we wore ourselves out.

That's when we met The Peanut Man.

Probably just a few years older than Charlie, he has the look people often associate with a Harley riding, long-haired, veteran... which of course, he is. Elena was instantly charmed by his easy smile and friendly nature. Somewhere in her mind, I'm sure the idea his German Shepherd shares a name with her Pawpaw's dog only adds to the bond.

Before we knew it, Elena, would wake up on Saturdays impatient for us to be ready to go to the "fee martet to get peanuts from The Peanut Man". By his turn, it wasn't long until, when The Peanut Man heard the distinctive knock of our Jeep's engine, he'd look up and wait to see "his girl". It became their routine for him to ask for a smile then give her a little bag of peanuts all her own, complete with a red sharpie smiley face.

Then came September and Elena's run in with boiling Ramen noodles. A tale it still hurts to tell, despite her determined positivity and unflinching bravery.

The first weekend after her burn, Elena couldn't get out of the Jeep as she was still on no walking orders and I was suffering the effects of carrying a 3 year-old several hours a day.

When Brent asked about his girl, I told him what happened and he immediately went over to the Jeep to talk to Elena through the window.

Each week, he asked how she was doing and rejoiced with us at each stage of her recovery. When she was back on her feet and bandage free, he encouraged her to come over behind the stand and visit with Buddy (who is still a ginormous puppy and expects a treat from her each week). I noticed the weekend after her final skin graft, he'd started setting aside Elena's personal bag of peanuts so they would be cool when we came driving up to the stand... A simple act of kindness and consideration for a kid who only shows the emotional effects of her accident when around steam.

The fact she's not afraid of the giant heated pots tells me a lot about the level of security she feels with Brent and our Saturday ritual... and it is kind of a ritual. It would make the whole trip to the flea market somehow off balance if we didn't stop to see Brent first. The first weekend we missed him, he was doing a charity bike run and it left the day feeling a little deflated.

Now, I'm not going to lie or even exaggerate here... Elena is a charming child... so charming in fact, she borders on con artist. I can't remember a Saturday in the last two months that she hasn't batted her big brown eyes into receiving at least one gift from a vendor. It's almost comical to watch her gently pick up small items of interest, smile her smile, speak in her miniature grown-up with a lisp way and receive gifts of affection from nearly every vendor my age or older (you know, grandparent territory).

The more we visit, the more people we've come to know, the more we get to see into a world that has a language and culture all its own... and the more it feels like home to us.

But it's Brent who keeps us coming every week. Brent is why, when Becka had her first opportunity for a Saturday morning off, she joined us so she could meet her daughter's Peanut Man. It was our Saturday trips to see him that marked off Elena's recovery... more than her trips to the doctors. It's Brent who will hold a fond place in Elena's childhood for her entire life. As far as she's concerned, he's why there is a flea market at all. I can almost see her with a child on her knees, shelling peanuts to share while she tells her own preschooler about her Peanut Man.

I couldn't go this morning and asked Becka to get a photo of Elena and Brent for this post. In a moment of embarrassment, I asked if she'd told him why I wanted a picture. She told me he mentioned he'd wanted to get a picture last weekend but had been hesitant to ask. He'll have this one in a frame next time we see him.

We all have in us the capacity to change a life for the better. We all have moments when we cross another person's path and leave a mark of permanence in their lives. All too often, because of the transience or simplicity of these moments, people can make a huge difference and never know it.

Which is why, in our particular story, Brent gets his own chapter. If nothing else, I can share this with him in print and thank him in a way I'd never be able to verbally articulate.

And maybe, it can be more... A chance to remind anyone who comes across this post that even the smallest acts of human kindness make a ripple, even if we don't see or feel it ourselves. It's those acts more than any others that show our true nature, our capacity to love and inspire the same in others.

Brent, you gave a little girl a handful of a favorite treat and found a place in the collective heart of our family. Thank you for being you and reminding a cynical, battle scarred lady it's not the ugly things in our lives that define us... but the beautiful ones.