Athena is back to her old self this morning. Rather than go on about it all day on Twitter, thought maybe I'd just post here and include a picture. 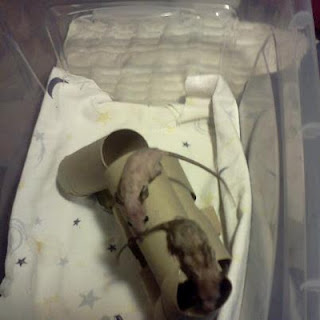 Athena is lighter colored as she has little fur. It looks like she'll end up being either a double rex (curly hair and occasionally hairless) or a hairless. Hairless rats occur when 2 rats with the rex/curly gene have pups...

Anyway, both Athena and Zeus are doing really well. Despite Athena's brush with death last night, she's fully recovered. She's got several scratches still to heal but the bruise on her head is all but gone.

I've been surprised and touched by how many people have been supportive of these little guys. Rats get too much of a bad rap. Thanks so much for the encouragement. Seemed appropriate to show you their new playground.

Email ThisBlogThis!Share to TwitterShare to FacebookShare to Pinterest
Labels: pets