At long last, John has his own baby. Cleo was meant to be his cat but my nursing of her created a pretty strong bond when she was tiny and he wasn't really mature enough at that time to grow close to a kitty. He's grown a lot in 3+ years.

He started bonding with Tiger, which worried me. I tried telling him from the start that Tiger wasn't ours and he would have to say goodbye come Monday. When Tiger left, John sat on the couch with tears in his eyes. It broke my heart to see.

I told him it was okay to miss Tiger and that Taffy would be missing him too. I asked him to make sure she got plenty of personal attention and for him to consider her his cat.

To Daniel's credit, even he has gone out of his way to not try to bond too closely with Taffy. Cats tend to gravitate to him and he's 100% cat person (has been since he was a toddler) and his affinity for cats has been a point of contention between the two boys. Especially as John felt he was the only person in the family to never have a kitten of his own.

Taffy is 6 weeks old, at most. She had no interest in humans while she had Tiger to play with but he went to his forever home Monday. Since then, she's been all about people and her person of choice is John.

I love seeing them together. 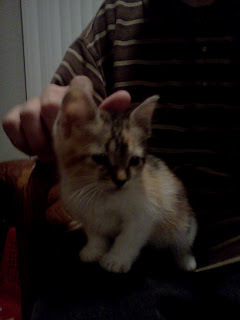 He walks around with her in his arms and when anyone reaches out to her, she buries her head in his armpit. She'll snuggle with anyone on her own terms but only John gets the trust to hold her as he pleases. He says he's teaching her "Be right back". I don't know that she really cares or understands... but do know it's important to him to feel he's building her trust... and he is. She trusts him.

God knows we have enough animals in this house. I'm always saying "No more"... but can't help but feel the crazy cat lady attack I had last week was meant to be.

We brought home a little boy we knew we couldn't keep and he had a new home before we'd even gotten him back to the house. I knew fostering one for only a few days would drive all my boys (Charlie included) crazy, so chose this little tabby from a litter of feral kitties up the street. Honestly, I thought she'd be "mine" as it my my little "gotta have a baby" fit that brought her in the house...

But she's John's... and the timing couldn't have been more perfect. She has the same need to receive love as John's to give it. His heart is enormous and his capacity to love is deep. Studies show pets can lower stress levels and blood pressure as well as elevate moods. John can have a hard time calming down when he's overwhelmed but I've seen him focus on his nieces to stay positive. Snuggling with Taffy gives him someone outside himself to focus on when he needs to calm down.

Something tells me Taffy has filled a need in John's life... a need I didn't truly understand until I saw him holding her and the look of total peace on her face as she nestled in his arms. She calms him. She slows his mach 10 mind a little and she loves him. Everyone needs to feel like the most important person in someone's life sometimes. Everyone needs to feel needed beyond the daily chore routine of life. Taffy needs him. It's been 2 days since Tiger left and it took less than that for her to decide it's John she'll leave the front room to follow.

Sometimes rash and emotional decisions bring small miracles. I'm grateful to be part of this one.