Today has been spent in varying degrees of massive anxiety/panic. I'm irritated with myself for getting lost in it... but in some ways, I think it was needed. Needed in that I don't let myself express my concern, worries, fears, hopes, dreams, disappointments where John's Autism are concerned. It's all about keeping a level head and a supportive face. Staying as consistent as possible without going insane and loving him when he has his distinctly unlovable moments.

It hit hard today. Today, I have been a quivering, hyperventilating, twitchy mess. I finally sat down with Krys while she and Dora were visiting the kittens and allowed myself to put my head on her shoulder and cry. Just a little bit... but still. I'm sure after everyone has gone to bed and it's quiet in the house, I'll disturb Charlie's sleep and ramble on about every rational and irrational thought and feeling that's come up today.

I feel like so much is riding on John's report. This is his chance to stand up and say he is different but not "wrong". He has disabilities and differences but is not mentally retarded or mentally deficient in any way. He's different and for every area where he struggles to fit in and be understood, there's an area where he excels and shines.

He's wearing a T-shirt I made today that he considers to be one of the required visual aids. It's his way of saying "I AM WHO I AM. DEAL WITH IT" 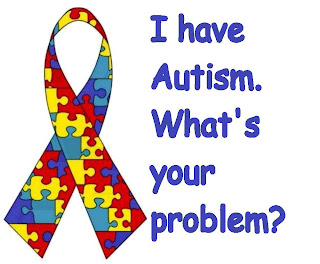 I'm so proud of him... but so scared at the same time. Part of me wants to ask the assistant principal who has been such a support to him to be there, if possible. I want to support him standing up for himself in an intelligent, articulate way... but I'm Mama... and I want someone to have his back.

I wish the house would get quiet. I wish they'd all hurry and go to bed. I want to curl up with Floppy (who moved back into the bed a couple of months ago) and wait until I have Charlie to myself.

John's got his crap together. He's good to go. I'm a slobbering mess. Lord, help me. I need some peace and strength so I won't be too worn out from worrying to rejoice with John tomorrow when he tells me he kicked butt and took an "A".
Posted by Marisa at 6:36 PM