It's nice to sit down with a subject and a few thoughts on said subject before opening a new post page... but I've been thinking and thinking and then the room started to fill with smoke and I gave up. So whatever comes to mind it is...

John's sense of humor is awesome. The First Place winner of his middle school's spelling bee posted the following status on Facebook in response to queries about the winning word: "i forget teh winnin werd sumthin in teh 'Godforsaken' catagory".

One of the most wonderful things about my family is knowing I can count on a true belly laugh at least once a day.

Yes, I am that grandmother. And Becka's that Mom (offscreen left) and Rachel's that Aunt (offscreen right).

Babysitting (borrowing) Dora for the night so Krys and Steve can have a night out on his birthday.  They're going midnight bowling. Dora keeps their schedule so she's usually up until about 2am. So I'm tossing back coffee spiked with coffee shots. The corner gas station gives them away with the creamer and I grab one every time I get a refill.

Wow, that sounds pathetic. I'm such a java junkie... but still a non-smoker so I'll worry about the caffeine another time.

I can't say enough how much Charlie and I are enjoying the grand-parenting gig. It's not just the babies... there's something about Charlie holding an infant that makes me fall in love with him all over again, every time. Krys and Becka are beautiful Moms and it's a joy to see the parents with their little ones.

Cleo, the adorable little kitten I bottle fed and played mama cat to, is pregnant. We're expecting the kittens just about any time. We're fairly certain she managed this before we had the AC replaced and could close all the windows. I didn't think she'd gotten out after that... but won't really know until the kittens are born. It's frustrating... We've been scraping together car money for the last few months and missed the chance to get her spayed before procreation. As much fun as it is to have kittens in the house, we really don't need to be the crazy cat family... oh, wait... forgot, we already are the crazy cat family. *sighs*

Random statement that reminded me we'll never be a normal family... "You'd better not be making biscuits on that yoga ball, cat. You pop it while I'm sitting on it, we're gonna have words."


When Krys and Steve came over, I was about a quarter of the way through the above project. Krys asked why I was making it (I can and have made linked steel chain-mail) and I shrugged and said "Because I can." I'm a craft collector, especially those that involve repurposing materials. I'll try any new craft at least once.

Not long after Krys and Steve left for their date, Daniel came in, hinted around about how many tabs it would take for a wearable shirt, speculated on how comfortable it would be then suggested we drink more soda... and I thought, that is why I'm making it. If it can impress Daniel and engage him in positive verbal interaction, I'll beg on the streets (or online) for tabs and build him an entire suit if he'd like. I might even be willing to buy more soda... but would rather not have to go that far. I like my family with teeth.

So, yeah... if you live nearby and you drink from aluminum cans, save the tabs for us. I need to find someone who drinks Red Bull. The tabs are different and it'd be fun to use those for a bracelet. 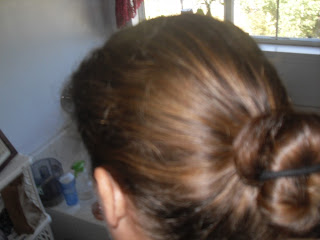 Lazy hair pic. This is immediately after putting it up, after applying smoothers and de-frizzers and before leaving the apparently protected air of the bathroom... because here it almost looks good. Daniel said something earlier today about me looking young. (I resisted the urge to ask if he was looking for something) John then came up to me, fluffed the frizz at my temples and suggested that "without those" I'd look even younger. "Yes, dear. Thank you. Now go away."

It may have been a fluke, as we haven't been able to repeat it and teething babies can be fussy that way... but yesterday, Becka and I were fairly certain Elena was freaked out when I had my hair down. Granted, it was the hideous Trelawney look... but I took my hair out of the ponytail, looked at Elena and she started to shriek. Put my hair back up and she instantly stopped and smiled at me. Curious, I took my hair down again and shook it out. Elena flipped out. Put it up, giant toothless grins. I did it one more time to be certain, while Becka giggled and I resisted the urge to grab the electric clippers and pull a britney spears... Not sure if I feel sorrier for Elena or myself.

Charlie and Daniel are going to fix a few things on the car tomorrow... Thank God for that car. It's getting too cold for sitting in the back of a truck to get around town. I was beginning to think the boys would have to keep sleeping bags in the truck to stay warm.

When I asked Daniel about his increasingly fluffy sideburns, he informed me he's NOT shaving until he first grows a beard. He's not waiting until he's "35 or something like that". It almost (but not quite) makes me miss the days when stinky feet were his biggest hygiene/grooming issue.

Hmmm.... not sure this is going to be a satisfying way to post... but I missed one day and did not want to miss a second. Technically, I have anyway as it's now half an hour into Saturday morning.

Thursday, fulfilled all the change guidelines... today I slept way late and mostly hung out with the babies. I'm not able to stay up late anymore just because I want to. As previously stated, it requires chemical assistance even with the extra sleep. However, bouncing on a yoga ball with fussy babies in my lap totally counts as exercise so it's all good.